Detailed REPORT with all evidences

What are the facts?

Singapore is one of the most exciting countries when it comes to Magic and Cardistry. Being a small state and island, meet ups are easy to execute, and the community continue to grow rapidly. Because Singapore is a very small society, any imbalance in marketing strategies, pricing, or bad seller ethics very quickly affects the consumers and seller credibility. This in turn can affect the livelihood or the peace among sellers.

The crux of this document is not what Hidden Street Magic thinks of Cardvolution, but to open up the truths with clear evidence of the attacks in which Cardvolution has continuously carried out. Since Cardvolution have not stopped their ill actions after all these years, we would like to speak up and show the truth on some of his latest untrue allegations, and hope everyone can be more aware of the false allegations, and stop listening to their gossip and possibly fabricated images. For the purpose of understanding, the name Cardvolution, and its owner Alan, will be used interchangeably referring to a single entity. The name Hidden Street Magic, and its owner Avriel, will be used interchangeably referring to another single entity.
​
Over the years, Cardvolution has been observed to be involved in various notorious acts, affecting and attacking other sellers of the same products he provide. This has occurred locally as well as internationally. Observed attacks include but is not limited to, arguing with other sellers; instilling fear in buyers; his supporters using secondary online accounts to defend him or to launch attacks for him etc. Because many decide to keep these issues from consumers, consumers are less aware or may not know of such ill intent actions. Established wholesalers and sellers however, know of such events. But in this sharing, we will stick only to the latest allegations Cardvolution have brought about on Hidden Street Magic. 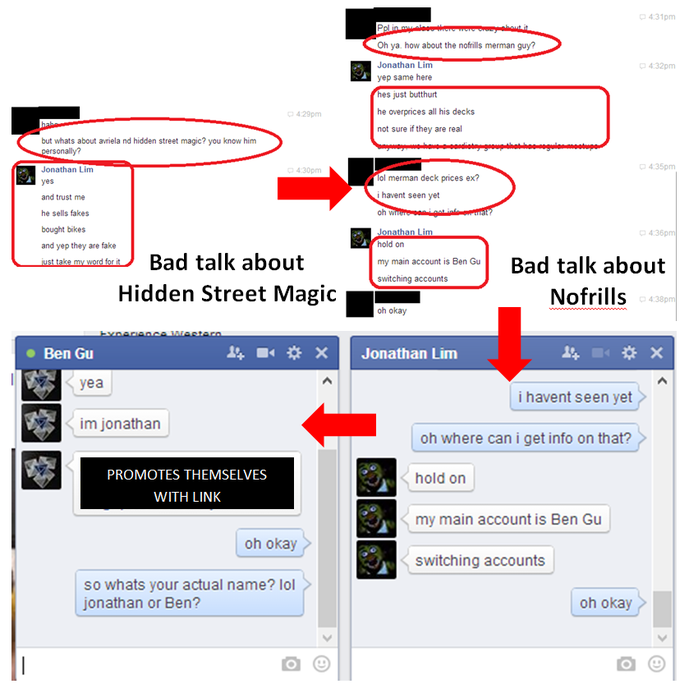 ​We would have thought that Alan from Cardvolution would stop their ways after a long period of silence, but a recent event showed otherwise. We want to stop these false allegations and untruths which are causing unreasonable doubt and fear among the community, by, for the first time, opening up evidence of some of his latest false allegations/libel.

From our observation, Cardvolution likes to make use of out of context/snippets of images and conversations to lure the innocent minds and consumers in believing his long term competitiors are unreliable, untrusted, and hence turn these new fearing minds in to his customers. These acts of dishonesty, wickedness and contempt can be seen in the recent case that occurred 25th Sept 2017.
​
Explanation of situation
Months prior to September, a buyer (name shall not be mentioned for his protection) decided he would use the brand of Hidden Street Magic in hope of upselling his decks. The buyer modified an invoice which he got from another seller (SXF) who later informed us of what was happening. 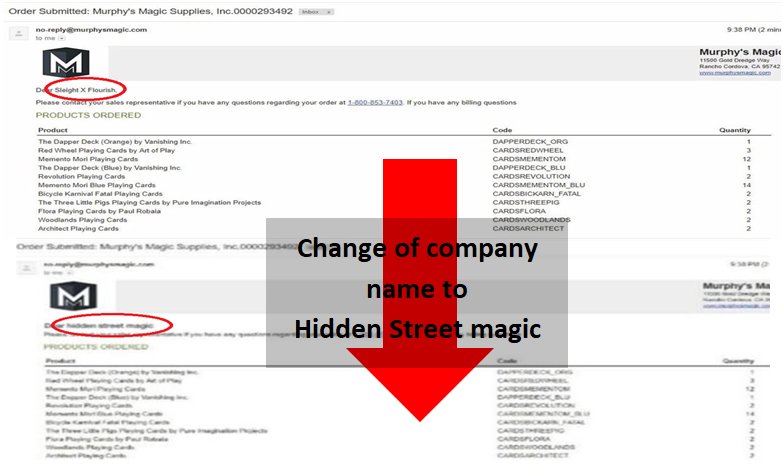 ​In the process of upselling his decks, he had also put down other sellers, in hope of winning the trust of Seller SXF. From the following conversations captured, we can see how Cardvolution jumped to seize the opportunity for his evil intent. 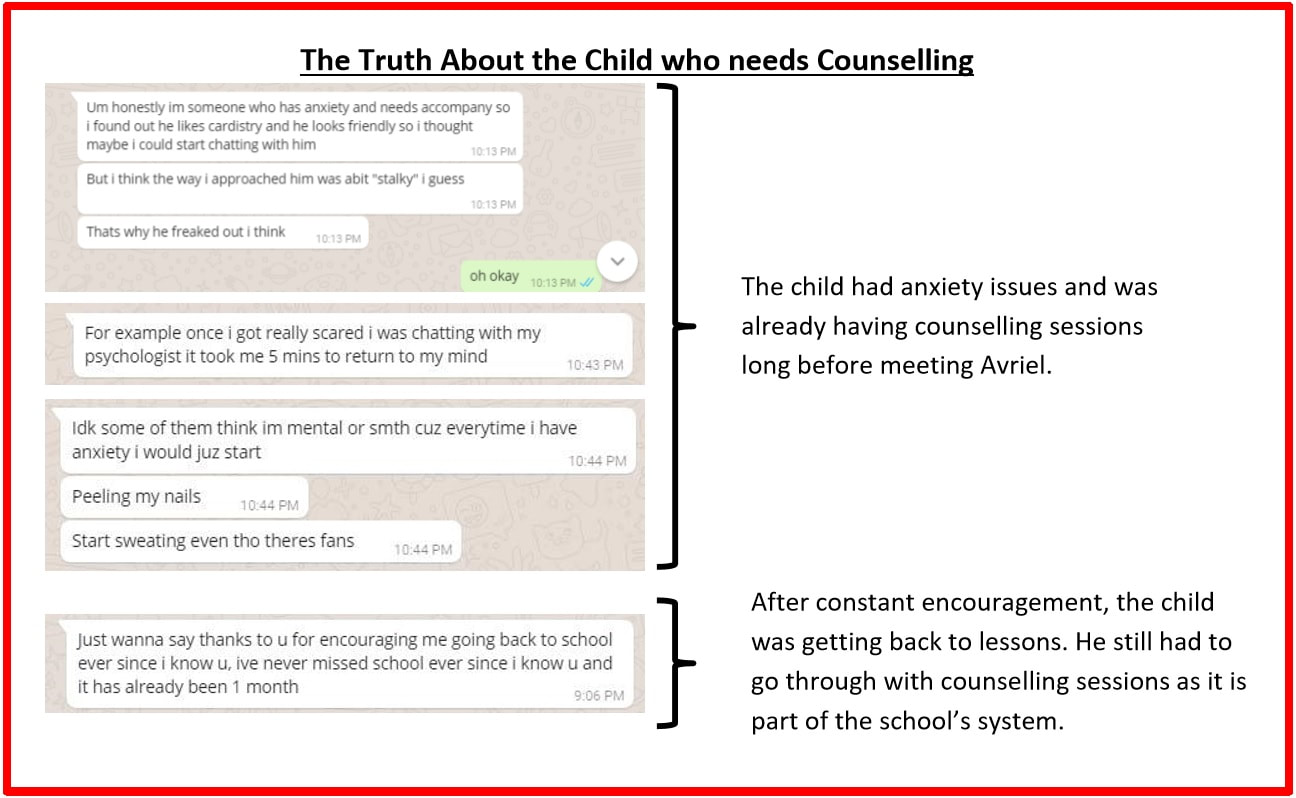 He then threatened and pressured the buyer by giving him 24 hours to respond, or face “the serious consequence of the police and his parents being informed”.

When the buyer clarified again, clearly that he did everything on his own accord, Alan from Cardvolution continued to defame Avriel by pulling him in to the situation. 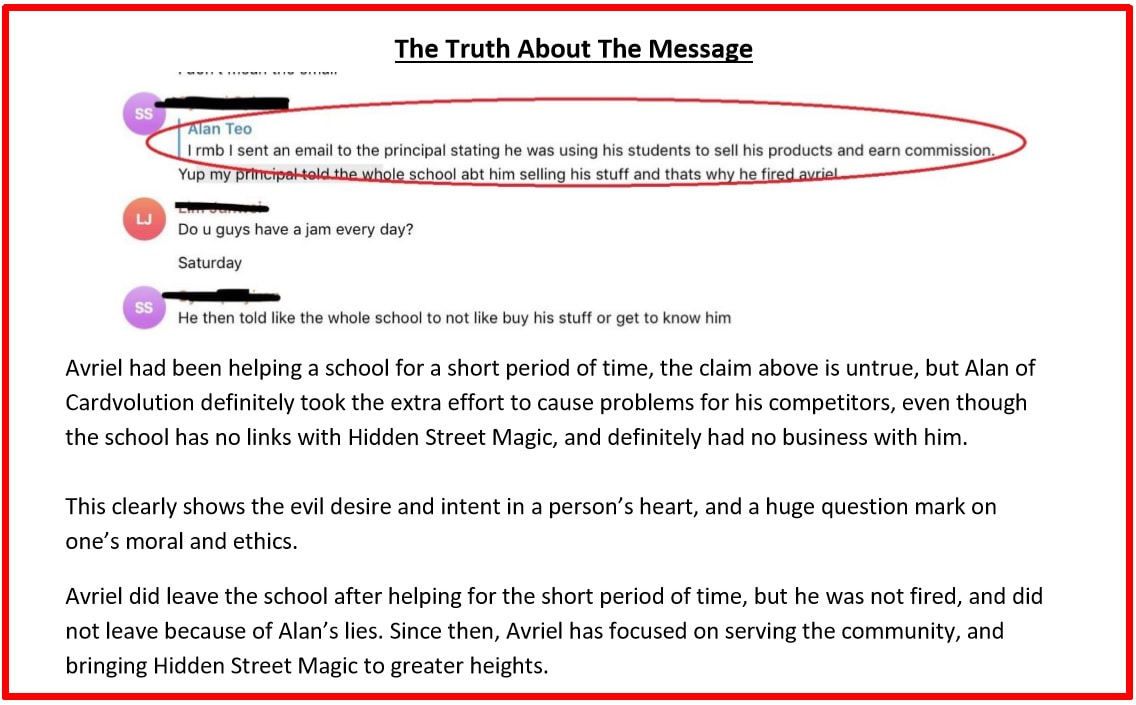 ​While Alan was harassing the buyer, knowing our brand name (Hidden Street Magic) had been made used of; we sent a message to Alan from Cardvolution plainly stating that we were not involved or behind the buyer’s actions. We wanted to clarify this so as to prevent any miscommunication or confusion. Alan from Cardvolution, however, remained obstinate and continued to taunt, in the hopes of trying to get Avriel involved. He started to make illogical statements in hopes of linking Avriel to the situation.

​Alan from Cardvolution had blocked the contact of various other card sellers beforehand, and hence Hidden Street Magic had to message Alan using another contact number.
This is immature, senseless, and illogical.

At our end, we have given grace to the buyer and told the buyer not to misuse other’s name again in future. The problem persists because as seen from the messages, Alan from Cardvolution continues to behave like a hooligan wanting to cook up trouble for everyone else, and implicatively trying to villainize others, and boost his own image.

We can, but will not proceed with legal actions, as we would prefer to use our finance to benefit the Magic and Card community.

Although the latest false allegations and ill actions of Cardvolution has  been clarified with evidence, we believe that Alan will continue to find ways in defending or attacking, by fabricating other untrue allegations and libel in continuous hopes of gaining market monopoly, and whetting his appetite for arrogance and snobbery. After all, he had lied and made use of a well-known organisation's name as his backing to make others believe that his actions were approved when they were actually not. His supporter had been caught using secondary online accounts to fend for him. For someone who constructs discourse to cause fear and distress; someone who goes out to attack the life of a seller beyond the business (character assassination); someone who continuously finds ways to obtain false evidences of other sellers.  What more can one say about such level of dishonesty and deceit.

We sincerely hope that Alan from Cardvolution and his hunchmen (if any) will cease listening to false accusations, and stop refrain from sending out-of-context images and conversations to intimidate and confuse buyers for his own benefit.

What can you do if you are harassed, threatened, or caused distressed by Cardvolution or his helpers?
1) Do not trust any of the information given or spoken of.
2) Contact and inform any other card sellers.
3) Talk to your parents or a trusted adult about it.
4) Do not be a silent victim.
*Update: Affected buyer has made a police report on the oppressor 'Alan from Cardvolution'. More information on that will not be divulged for security purposes. (Report attached at bottom of this page). 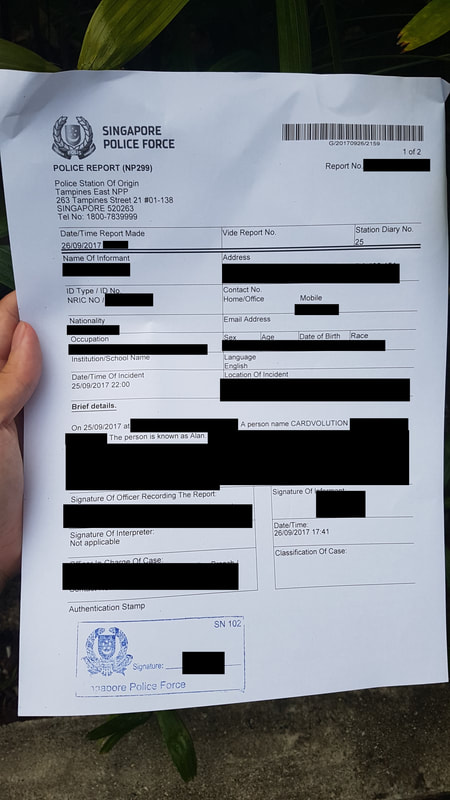