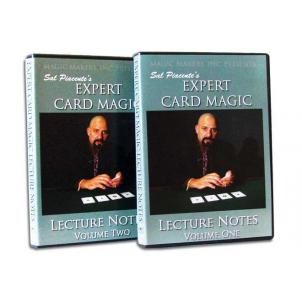 SKU:
SGD100.00
SGD100.00
Unavailable
per item
The Effect
For those who want to perform card magic at the expert level, Penguin Magic is proud to release Sal Piacente's EXPERT CARD MAGIC LECTURE NOTES. If you're ready to be among the best, here it is.

Join card magician and world renowned gaming expert Sal Piacente, as he takes you step by step through 5 of his amazing expert card routines. These routines have gained him prestige and respect with magic's elite.


"I think that both Ace cutting effects are alone worth the price of admission. I must admit one of the principles in the Ace cutting routine I was not aware of and think that it is really a great secret. I also loved the way that Sal performs. I am just glad that I did not run into him at a bar. I know that he would have conned me. He is extremely convincing and cunning. I feel that this is a must see for all serious card guys." -- David Solomon

"You're not ready for these DVDs. Yes, that's a challenge. Prove me wrong and you'll discover some of the most powerful card magic in the world. Highly recommended for serious card workers." -- Jonathan Evans, Penguin Magic

"The first routine in the first DVD (Sal's Memory Opener) is worth ten times the price of the DVDs. Not for beginners." -- Jay Noblezada, Penguin Magic

"...you'll learn some very good tricks that should have remained secret." -- Michael Close

"I'm a worker and I've been doing this for years, and this is one of the best videos i've ever seen. My audiences look at me like I'm some kind of god when I do this stuff." -- Paul Lelekis
Add to Cart