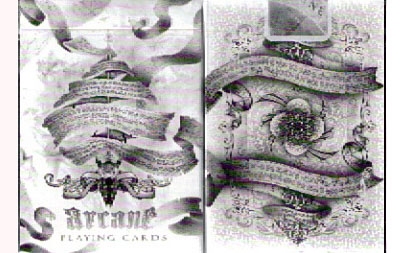 
The artwork was born from a dream our designer had. It took five years to finally develop into what you see.


Watch Lee Asher and other professionals perform with Arcanes.

Get 6, or try the sample pack (one black and one white deck) in the drop down above.

Arcane is the first in Ellusionist's new line of Signature playing cards. Whether you infuse your magic with as much magic and mystery as a fantasy story, or you ground yourself in reality through gambling demonstrations, these cards will help your performance become more elegant, mysterious and powerful.


Three top designers from across the globe working never-ending nights, burning midnight oil, and months of midnight jam sessions to bring you a deck of playing cards unparalleled and unsurpassed in the industry.

Printed the U.S. Playing Card Company, the Arcane deck sets new standards for playing cards. Arcane paves the way between the old and the new.

Featured within each deck are classic Ellusionist innovations combined with incredible new features:

Arcane also offers features found in our other decks of custom playing cards, including:


LEARN THE UNKNOWN. MASTER THE ARCANE.